From Heraldry of the World
Your site history : Portora Royal School
Jump to navigation Jump to search 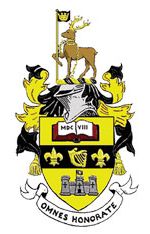 Arms: Or, on a fesse sable between in chief an open book proper, edged gules, bound and inscribed with the Roman numerals MDCVIII of the second, and in base - a castle also proper, flying therefrom a banner of St. George, a harp between two fleurs-de-lys Or.
Crest: On a _ wreath of the colours, A stag trippant proper, collared with a chain reflexed over the back Or, supporting with the dexter foreleg a staff of the last, flying therefrom a banner sable charged with a mural crown gold.

The arms were officially granted on February 2, 1954.

If you have any information on these arms Royal School mail us !