From Heraldry of the World
Your site history : Portsmouth
Jump to navigation Jump to search 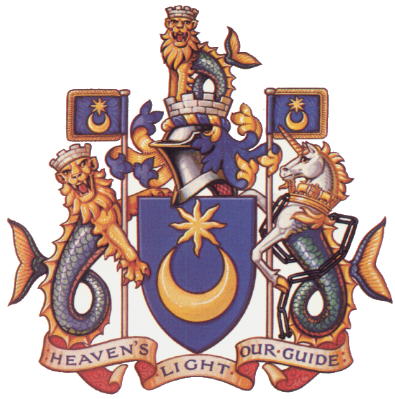 The golden star and crescent on a blue backgound have been the City's arms for 800 years. There are various theories about their origin but it is likely that the device was copied from the arms of William de Longchamp, Lord Chancellor to Richard I at the time of the granting of the Town's first definite Charter on 2nd May 1194. However, as William de Longchamp had also adopted a variation of the arms used by Richard I on his first Great Seal, there is no reason why Portsmouth should not similarly have adopted a variation of Richard's Arms directly, as a compliment to the King for the favours that he had shown the Town during his brief reign.
Richard's first great seal showed on either side of his head a star with six wavy rays (known as an estoile) above a crescent moon. On some specimens of his first Great Seal an eight-pointed star was used. It is not known for certain whether Richard adopted this device as a result of going on the Crusades to Palestine in 1191, or whether it was a punning reference to the star called Regulus in the constellation of Leo, which is commonly known a "Cor Leonis", or "Heart of the Lion", a nice play on words on Richard's nickname.

The motto "Heaven's Light Our Guide", was registered in 1929, it is that of the Order of the Star of India and of the old indian troop ships which embarked their passengers at Portsmouth.

The supporters and crest were added in 1970. The sea lion and sea unicorn are a maritime version of the Royal Crest and Supporters. A rare privilege, reflecting Portsmouth's long association with the Crown. The unicorn wears a naval crown and a mighty chain of iron, which is a pictorial representation of the chain boom, which, from Tudor times, stretched from the Round Tower, Old Portsmouth, to Fort Blockhouse, Gosport, as a protection to Portsmouth Harbour. The mural crowns are civic emblems and also refer to the land defences which surrounded Portsmouth from Elizabethan times to 1862.

Literature : image and backgound send to me by mail.