From Heraldry of the World
Your site history : Portuguese India
Jump to navigation Jump to search 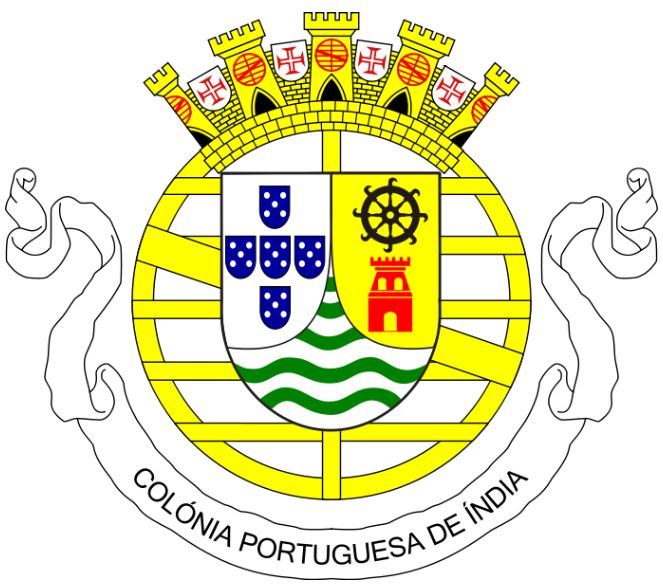 Portuguese India was a Portuguese colony until 1975. It is now the State of Goa in India.

In June 1932 the first arms for the Portuguese colony of Portuguese India were designed and proposed to the Ministry of Colonies. The arms follow a centralised pattern with a bordure with the castle of Portugal and a cross as used by the Portuguese discoverers. For each province a separate symbol was used as the main charge. For Portuguese India an old man holding the shield of Portual was chosen. These arms were, as far as I know, never officially adopted and replaced in 1935.

On May 8, 1935 the colony received its first arms, based on the same structure as all Portuguese colonies (compare Angola, Macao and Mozambique). The upper right half and the bottom are identical for all colonies and show the 5 shields of the Portuguese National arms and the waves for the 'overseas' colonies. The upper left half differs between the colonies and Portuguese India a broken wheel (for Saint Catherine) and a tower (fortress) were chosen. These already appeared in a roll of arms of 1862.

When in 1951 the colony was transformed into a province, the text on the banner was changed from Colony to Province, but the arms itself remained unchanged. The arms were abandoned at the independence in 1975.