From Heraldry of the World
Your site history : Posen-Westpreussen
Jump to navigation Jump to search 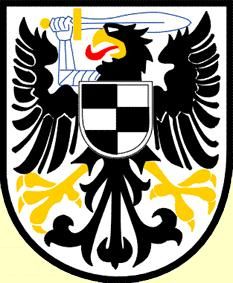 After the Versailles treaty in 1919, a large part of the Prussian provinces Posen and Westpreussen were transferred to the new Polish republic. The remaining area was transformed into a bufferzone, or Grenzmark named Posen-Westpreussen.

The arms were from 1925-1929 identical to the arms of Westpreussen, without the supporters and helmet. In 1929 the Polish eagle was replaced by a small shield showing the colours of the flags of Westpreussen (black-white-black) and Posen (white-black-white).

In 1938 the Grenzmark ceased to exist.