From Heraldry of the World
Your site history : Post Office Corporation
Jump to navigation Jump to search 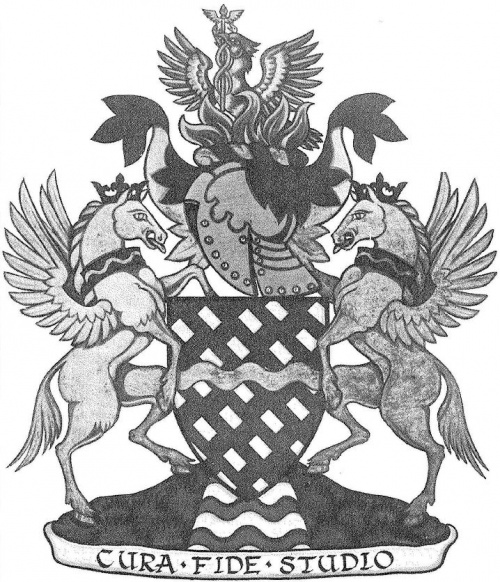 Arms: Gules, billetty bendwise argent, a barrulet wavy Or.
Crest: On a wreath Or and gules, a phoenix proper holding in the beak a caduceus Or.
Supporters: On either side, a pegasus Or, crowned with an ancient crown and gorged with a collar gules charged with a barrulet wavy Or. Compartment: Grass, vert, bisected palewise by water barry wavy argent and azure.
Motto: Cura Fide Studio.

The arms were officially granted on ? by both the College of Arms in England, as by Lord Lyon in Scotland (version shown above).

The main tinctures used are those most associated in the public mind with the Post Office: red for letter-boxes, mail vans and telephone kiosks and yellow (gold) the colour of telecommunications service vehicles. The white billets on red symbolise letters and parcels and the barrulet wavy refers to electrical energy used in telecommunications. The phoenix of the crest is a reminder that the present Post Office was born out of the previous one whilst the wand of Mercury, messenger of the gods, represents speedy communication.

The days of horse-drawn mail are recalled by the pegasus supporters whose wings allude to the sending of communications through the sky — both by air mail and by radio (including satellite) communication.

The crown denotes the traditional and continuing services to the Crown by the Post Office and the collar the unity of those services.

The compartment represents the international communications services and the motto translates the concepts of service, sincerity and diligence.