From Heraldry of the World
Your site history : Preston and Northcote Community Hospital
Jump to navigation Jump to search 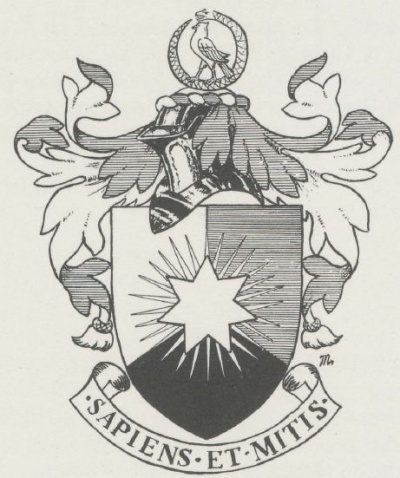 Arms : Tierced in pairle reversed Vert, Gules, and Sable, a Mullet of seven points irradiated Or.
Crest: On a Wreath Argent and Gules, a Dove Argent, environed by a Serpent, the head in sinister chief facing to the dexter Vert.
Motto: 'Sapiens et Mitis'.

The arms were officially granted on September 17, 1962.

As the Hospital serves the three districts of Preston, Northcote, and Whittlesea, the Shield is divided into three, green also symbolizing agriculture, red business and professional activities, and black industries. The irradiated star joining them symbolizes healing and knowledge (the Hospital being a teaching hospital), and itself represents one of the stars of the Southern Cross, the Arms of Victoria.

In the Crest the serpent represents healing, and the dove peace and gentleness, and their combina­tion, reflected also in the motto, is taken from the exhortation of Christ in Matthew x, 16: 'Be ye therefore wise as serpents and harmless as doves'.