From Heraldry of the World
Your site history : Principality of Anhalt
Jump to navigation Jump to search 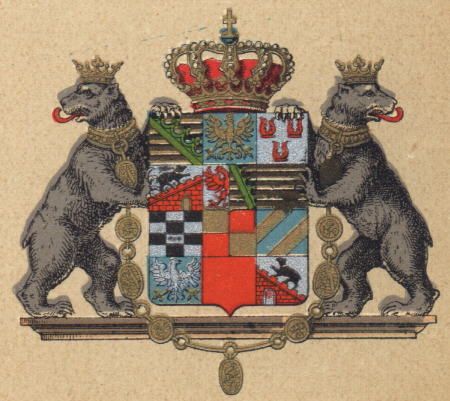 Anhalt was a Principality, which existed until 1918. From 1918-1933 it was a semi-independent Free State (Freistaat).

The arms of the prinicpality of Anhalt are very complicated, and reflect, contrary to most other historical German arms, not parts of the principality itself, but show mainly symbols from (old) possessions of the royal family.

Anhalt was ruled by the Askanier dynasty, one of the oldest and most powerful German noble families. The family also ruled over Sachsen until 1422 and Brandenburg until 1319.

The fields in the arms represent the following territories/titles :
1. The Duchy of Sachsen, a claim to the old possession.
2. A golden eagle in blue, the arms of the medieval Pfalz Sachsen (an old title).
3. The red leaves of the Duchy of Engern. A historical claim, as the Duchy of Engern was a part of the medieval Duchy of Sachsen (Sachsen-Mitte).
4. A black bear as a canting element for the title Count of Bäringen. A claimed title, as no county existed with that name.
5. A striped field for the Estate of Ballenstedt. The ancestral castle of the dynasty was in this estate. From 1765-1863 it was the residence of the Dukes of Anhalt-Bernburg.
6. Chequered of silver and black. These are the historical arms of the family, and represent the County of Ascania. Both the county and the arms are fantasy, designed to give an ancestry to the family.
7. Chequered of gold and red. The arms of the County Waldersee, near Dessau. The county was created for a illegitimate son of Frans of Anhalt-Dessau in the 18th century.
8. Two blue bends. The arms of the County Warmsdorf, one of the oldest possessions of the family.
9. A silver eagle for the County Mühlingen. This is a political field, as the county of Mühlingen was divided in 1659 by Sachsen-Weissenfels, Anhalt-Zerbst and the city of Magdeburg. The Princes of Anhalt-Zerbst received the parts of Sachsen in loan. The addition of the arms of Mühlingen thus symbolises the claim to the rest of Mühlingen.
10. A red field, the symbol for the so-called Royal privileges. In medieval times a small number of local rulers had the right to elect the King of the Holy Roman Empire. This was symbolised by a plain red field in the arms.
11. The arms of the Estate and city of Bernburg, one of the oldest possessions of the family.
Finally, the small escutcheon showing the arms of the Duchy of Anhalt proper, with the two main historical fields, the arms of Sachsen and the eagle of Brandenburg.

The arms of the Free State were identical to the historical arms of Anhalt. 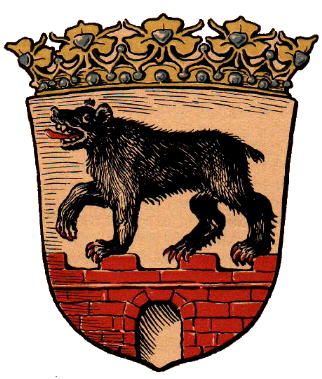