From Heraldry of the World
Your site history : Provincial Building Society
Jump to navigation Jump to search 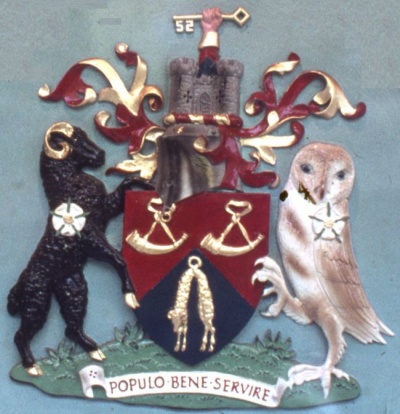 Arms: Per chevron gules and azure, in chief two bugle horns stringed and in base a fleece Or.
Crest: On a wreath of the colours, issuant from a port between two towers proper a cubit arm vested per chevron gules and azure, cuffed Or, the hand also proper grasping a key fessewise, wards downwards and to the dexter, gold.
Supporters: On the dexter side a ram sable, homed and unguled Or, and on the sinister side an owl proper, both charged with a rose argent, barbed and seeded also proper.
Motto: Populo bene servire

The arms were officially granted on November 26, 1945.