From Heraldry of the World
Your site history : Provincial Grand Lodge of Durham
Jump to navigation Jump to search 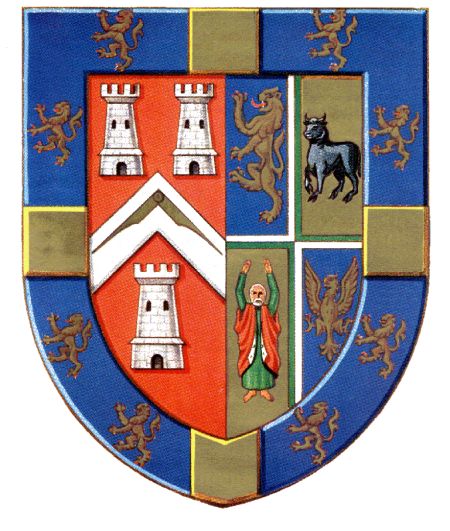 Per pale gules and quarterly azure and Or; dexter on a chevron between three castles argent a pair of compasses extended of the third; sinister a cross quarterly of the fourth and vert between, in the first quarter a lion rampant of the third, in the second an ox passant sable, in the third a man with hands elevated proper vested of the fifth the robe crimson lined with ermine, and in the fourth an eagle displayed also of the third; the whole within a bordure of the second charged with a cross between eight lions rampant of the third.

The arms were officially granted on July 24, 1922. The Shield show the Arms of the United Grand Lodge of England, with the Cross and Lions from the Arms of the County of Durham.