From Heraldry of the World
Your site history : Provincial Grand Lodge of West Lancashire
Jump to navigation Jump to search 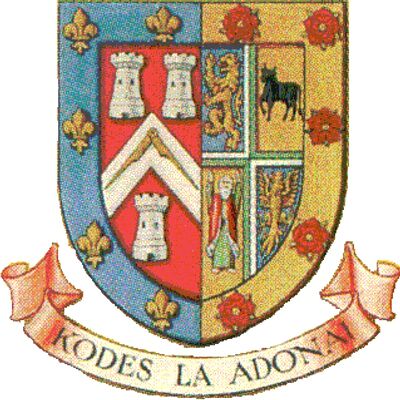 Per pale gules and quarterly azure and Or; dexter on a chevron between three castles argent a pair of compasses extended of the third; sinister a cross quarterly of the fourth and vert between, in the first quarter a lion rampant of the third, in the second an ox passant sable, in the third a man with hands elevated proper vested of the fifth the robe crimson lined with ermine, and in the fourth an eagle displayed also of the third; the whole within a bordure per pale of the second and third seme of fieurs-de-lys gold and roses of the first.

The arms were officially granted on October 28, 1920. The Shield shows the Arms of the United Grand Lodge of England, with a brodure showing the Fleur-de-lis and the Red Roses of Lancashire.

If you have any information on these arms Grand Lodge of West Lancashire mail us !