From Heraldry of the World
Your site history : Queen Elizabeth's Hospital, Bristol
Jump to navigation Jump to search 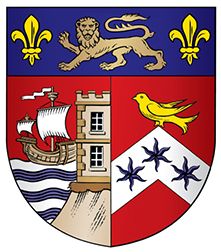 Arms: Gules, on waves of the sea with dolphins' heads therein proper, the bow of a ship with cupola argent, garnished Or, issuant out of a port on the sinister silver, with mount vert impaling Gules, on a chevron argent three estoiles sable, in chief a martlet Or; over all on a chief azure a lion passant guardant between two fleurs-de-lis Or.
Crest: On a wreath of the colours, On the stem of a tree cooped and eradicated, entwined by a serpent proper, a bird, wings endorsed, argent.
Supporters: On each side a sea horse proper, ducally gorged and crined Or.

The arms were officially granted in 1591.

If you have any information on these arms Elizabeth's Hospital, Bristol mail us !