From Heraldry of the World
Your site history : Queen Elizabeth Hospital
Jump to navigation Jump to search 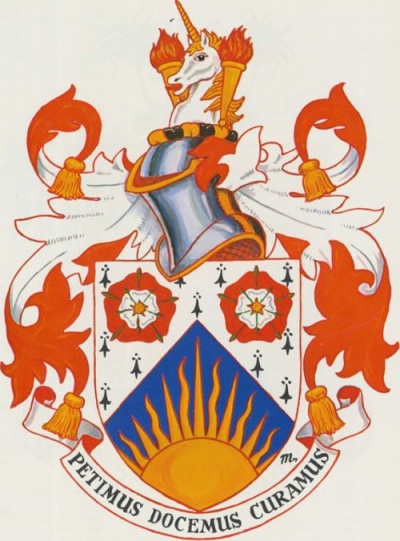 Arms : Per chevron Ermine and Azure, in chief two Roses Gules on each another Argent barbed and seeded proper, and in base a Sun rising Or.
Crest : On a Wreath Or and Sable An Unicorn's Head Argent armed and crined between two Torches Or enflamed proper.
Motto: 'Petimus, Docemus, Curamus'

The shield is blue, the upper portion of which is ermine-covered signifying the Royal association of the Hospital. Upon the ermine are two Tudor Roses-the main emblem of the Hospital. The lower part of the shield shows blue and is occupied by a golden rising sun being part of the Armorial Bearings of the State of South Australia.

The Crest is surmounted by a white unicorn­ a very ancient symbol of Medicine-which is supported by two gold torches of knowledge.