From Heraldry of the World
Your site history : Queens' College (Cambridge University)
Jump to navigation Jump to search 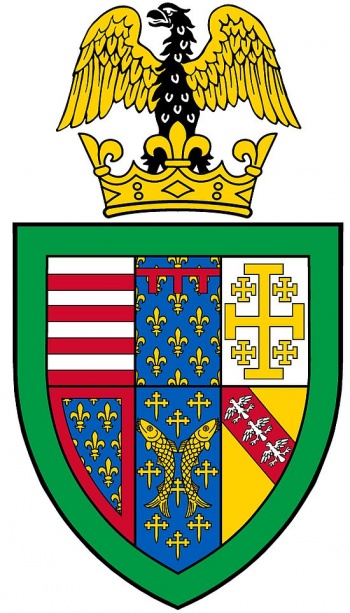 Arms : Quarterly of six, first harry of eight argent and gules (for Hungary); second azure semee-de-lis Or a label of three points gules (for Anjou-Sicily); third Agent a cross potent between four crosses couped Or (for Jerusalem); fourth azure semee-de-lis Or a bordure gules (for Anjou); fifth azure crusily two barbels haurient and addorsed Or (for Barr); sixth Or on a bend gules three allerions displayed argent (for Lorraine); the whole within a bordure vert.
Crest: In a coronet of gold an eagle rousant sable winged gold.

Queens' College (originally Queen's College) was first founded in 1448 by Margaret of Anjou, Queen of Henry VI, in emulation of her husband's foundation, and was refounded in 1465 by Elizabeth Widville, Queen of Edward IV.

The college first bore the arms of Queen Margaret without difference, and in 1575 these were granted with the addition of a bordure. The arms are : Quarterly of six, Hungary, Naples, Jerusalem, Anjou, Barr and Lorraine, all within a bordure vert.