From Heraldry of the World
Your site history : RAF Staff College
Jump to navigation Jump to search 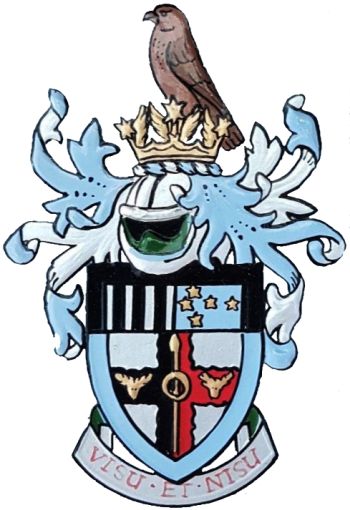 Arms: Argent, on a cross engrailed per pale sable and gules a spear in pale surmounted in the fess point by an annulet between two buck's heads caboshed Or; on a chief per pale argent and bleu celeste, to the dexter three pales sable and to the sinister a representation of the constellation Aquilla Or; all in a bordure per chief sable and bleu celeste.
Crest: On a Royal Air Force Pilot's helmet proper, On a wreath argent and bleu celeste. Out of an astral crown Or the hawk of Horus proper.
Motto: Visu et nisu

The arms were officially granted on January 2, 1970.

If you have any information on these arms Staff College mail us !