From Heraldry of the World
Your site history : Radley College
Jump to navigation Jump to search 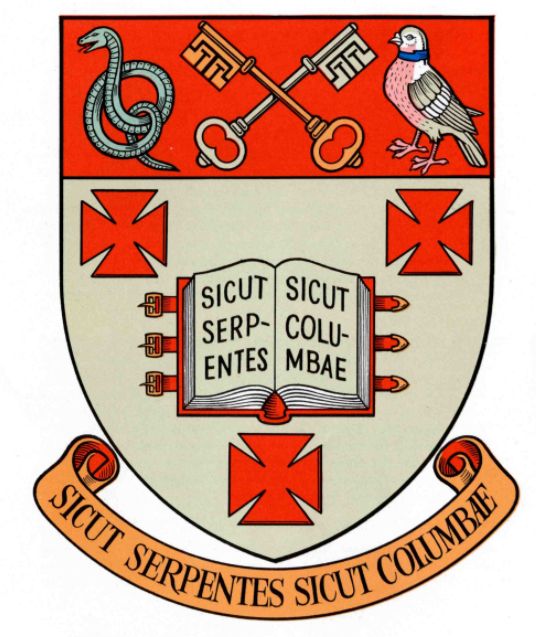 Arms : Argent, an open book [proper] garnished gules, clasps and buckles Or, thereon inscribed the words 'Sicut serpentes sicut columbae' between three crosses patee of the second; on a chief of the last a key in bend sinister of the first surmounted by a like key in bend dexter gold between to the dexter a serpent nowed and erect and to the sinister a dove, both proper.
Motto: Sicut serpentes sicut columbae.

The open book symbolises learning and reflects the heraldic device of Oxford University. The clasps and buckles are taken from medieval books which were clasped/locked shut to protect the contents from dust, and an opened book symbolises access to learning.

Inscribed thereon Sicut serpentes sicut columbae. This is the motto of the school. It is written on the open book in acknowledgement of the role Oxford University played as a model for the school.

The Maltese cross was originally adopted by the College as a badge for all sports. It appears on a tankard awarded to Edward Kennard for Senior Athletics in 1858/9. It became the symbol of the Boat Club from the earliest known crew and has continued in use by them ever since. It was probably adopted in honour of Sir George Bowyer, the owner of Radley Hall and from whom the house and grounds were rented when the school was founded in 1847. Bowyer was created a Knight of Justice of the Order of Malta and a Knight Grand Cross of the Order of St. Gregory the Great in the early 1850s.

The crossed keys are the symbol of St. Peter. From its very foundation the College was named and dedicated to St Peter and is formally called St Peter’s College, Radley. William Sewell and Robert Singleton the co-founders and first Warden, referred to their pupils as Petreians rather than Radleians, although the term Radleian was in common usage from at least 1855.

To the right of the crossed keys is a knotted serpent standing up on his tail, and to the left a dove. Both are shown as though they are painted in their natural colours, rather than heraldic colours. The serpent and the dove were the symbols of Radley College from its foundation. The Latin motto ‘sicut serpentes sicut columbae’ was adopted by William Sewell not just because these were the characteristics he hoped his pupils would develop, but as a Latin pun on his other foundation, St Columba’s in Ireland. The motto comes from Matthew 10:16 ‘Behold, I send you forth as sheep in the midst of wolves: be ye therefore wise as serpents, and harmless as doves.’

Literature: Image and info from https://100radleyobjects.files.wordpress.com