From Heraldry of the World
Your site history : Rafael Renier Yosendi
Jump to navigation Jump to search 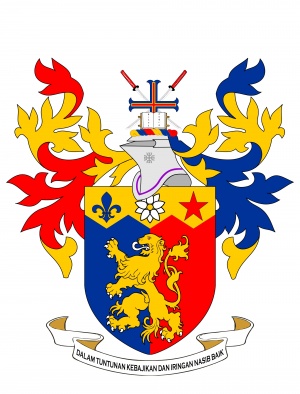 Arms: Per pale Azure and Gules, a Lion Or armed and langued Argent; on a chief dancetty Or a Jasminum Sambac flower proper between a Fleur-de-lis Azure and a Mullet Gules.

Crest: Two Katanas Argent, hilted Gules, pointing downward, in saltire, charged with a Cross moline Azure, charged with a Greek cross Gules, fimbriated Or, charged at base with a Book proper, inscribed with «philos» and «sophia» in Greek letters Sable and palewise.

The Blue Fleur-de-Lis represent their wife and two children. It has two meanings, being a flower and a halberd, it represent both their daughter and son. It is also as a reminder to keep up the struggle, work hard, and pray.

The Jasminum sambac represent the armiger's nationality as proud Indonesian.

The Book inscribed with Greek words "philos" and "sophia" represents their philosophy books and interest in reading them, both eastern and western. The words have a good meaning: love and wisdom.

The Two Crosses represent the armiger's family faith; they grew up Catholic and but spent their as Protestant.

The Two Katanas represent the armiger's struggle to find and shape to themselves, a period of their life when they found guidance in Zen and the two sword wielding style.

The per pale blue and red field of shield, together with the gold dancetty chiefinstantly draws more symbolism to the coat of arms, symbolising a Tulip flower and the daylight. The flower is a link to the Netherlands and thus represents their Dutch ancestral homeland.