From Heraldry of the World
Your site history : Ratcliffe College
Jump to navigation Jump to search 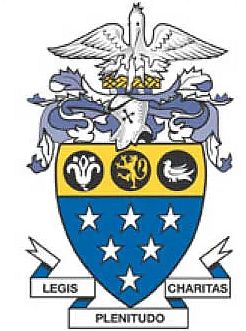 Arms: Azure, six mullets, three, two and one, argent; on a chief Or three pellets, the centre one charged with a lion rampant of the third, the dexter with a lily and the sinister with a swallow both of the second.
Crest: On a wreath of the colours, A pelican in her piety affronte argent, vulning herself proper, the nest Or.
Motto: Legis plenitudo charitas

The arms were officially granted on September 23, 1936.