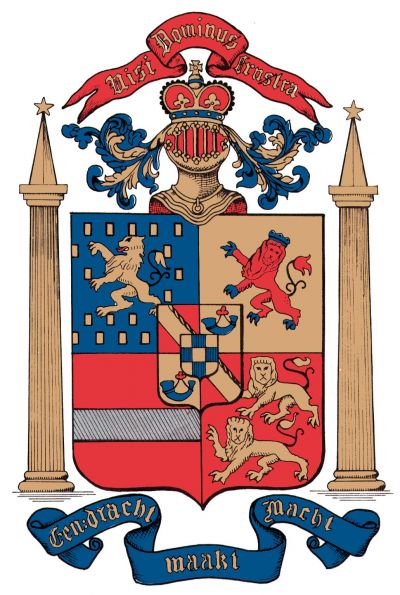 The arms of the Reformed Church in America are identical to the coat of arms of the founder of the Dutch Republic, William the Silent, Prince of Orange (1533-1584), and the leader to whom the Netherlands owes its civil and religious independence.

The various countries represented on the coat of arms show the principalities of which William was ruler, or to which he was in some way related. The upper left quarter of the large shield bears the arms of Nassau in Germany. The golden billets here are numbered seventeen, which represent the then 17 states of the United Netherlands. The second quarter shows arms of the County of Katzenelnbogen, the third the County of Vianden and the fourth the County of Diez.

The small quartered shield represents various principalities. The first and fourth, which bear diagonal bands of gold on red, stand for the principalities of Chalons; the second and fourth quarters, which depict the horn of a bugle on gold, symbolize those of Orange. The smallest shield is that of Jane of Geneva, who married one of the Princes of Orange.

To adapt William of Orange's coat of arms, the Reformed Church added the pillars, stars, and mottoes. The Latin words, Nisi Dominus Frustra, "Without the Lord all is in vain," reveal humanity's complete dependence on God. Eendracht Maakt Macht, "In unity there is strength," summarizes a lesson the Dutch learned through their war for independence.