From Heraldry of the World
Your site history : Refuge Assurance
Jump to navigation Jump to search 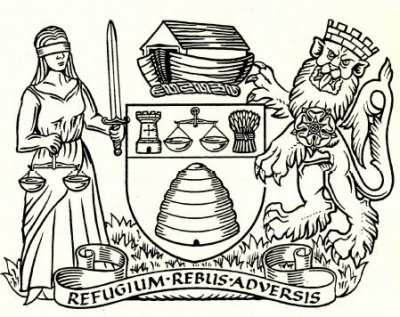 Arms: Gules, a beehive Or; on a chief azure a pair of scales between a tower and a garb of the second.
Crest: On a wreath of the colours, A repre­sentation of Noah's Ark proper.
Supporters: On the dexter side the figure of a woman representing Justice proper; blindfolded and habited in a robe argent, in her dexter hand a pair of scales and in her other hand a sword erect Or. On the sinister side a lion guardant gules, murally crowned and charged on the shoulder with a rose gold.
Motto: Refugium rebus adversis.

The arms were officially granted on September 19, 1951.

If you have any information on these arms Assurance mail us !