From Heraldry of the World
Your site history : Reigate
Jump to navigation Jump to search

Incorporated into : 1974 Reigate and Banstead 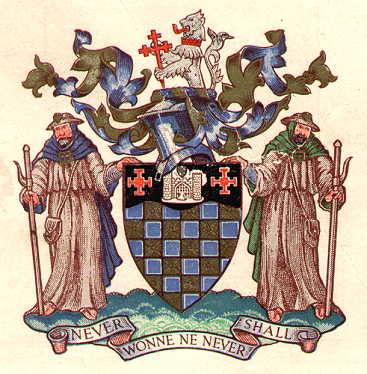 Arms : Checky Azure and Or on a Chief wavy Sable between two Crosses potent quadrate Gules fimbriated Argent a Mount thereon in front of an Oak Tree of the last the leaves charged with an Escutcheon chequy Azure and Or a Port with porcullis raised between two Towers also Argent.
Crest : On a Wreath of the Colours a demi Lion Argent gorged with a Mural Crown and supporting with the paws a Cross crosslet fitchée Gules.
Supporters : On either side a Pilgrim with Staff and Scrip and habited in Traditional Costume proper the dexter having a Cloak Azure and the sinister a Cloak Vert both buckled Or.
Motto: 'NEVER WONNE NE NEVER SHALL'

The arms were officially granted on September 26, 1951.

The castle gateway in front of an oak-tree from which hangs the chequered shield of the Warenne, Earls of Surrey was formerly used as a device by the Corporation. This device now forms a charge in the arms, while the Warenne chequers form the background of the shield. The black of the chief links the arms with those of the County Council, and also Guildford, the former county town. The the wavy line represents the outline of the Surrey hills and the crosses potent and quadrate are from the arms of the priory of Austin Canons founded at Reigate by William de Warenne in the thirteenth century.

The lion and the cross-crosslet are from the the heraldry of the Howard family, with particular reference to William, Lord Howard of Effingham, who obtained from the Crown a grant of Reigate Priory in 1541. The mural crown refers to civic government.

The supporters represent Reigate's historic importance as a town on the ancient Pilgrims' Way.

The motto is the distinctive one used by Reigate for generations. This was included in the Borough Council's first seal and comes from an old couplet, quoted by Camden, referring to the legendary defeat of the Danes in the Vale of Holmesdale; "The Vale of Holmsdall: Never Wonne ne never shall".