From Heraldry of the World
Your site history : Reliance Mutual Insurance Society Limited
Jump to navigation Jump to search 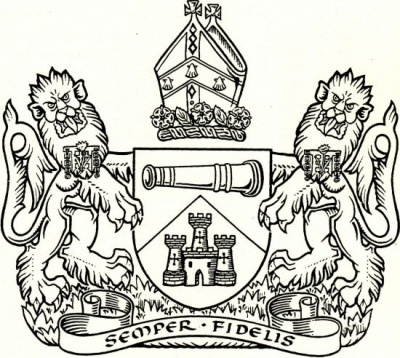 Arms: Per chevron gules and argent, in chief a cannon barrel fessewise Or and in base a castle of three towers proper.
Crest: On a wreath of the colours, Issuant from a chaplet of roses argent, barbed and seeded proper, a mitre gules, the two points ensigned with two crosses patee Or and the cap charged with a chev­ron also argent fimbriated gold thereon three escallops sable.
Supporters: On either side a lion guardant Or charged on the shoulder with a portcullis chained sable, in front thereof a slip of thrift stalked leaved and flowered proper.
Motto: Semper fidelis.

The arms were officially granted on November 2, 1951 to the Farringdon Reliance Mutual Life Insurance Society Limited.

If you have any information on these arms Mutual Insurance Society Limited mail us !