From Heraldry of the World
Your site history : Rendell Salgado
Jump to navigation Jump to search 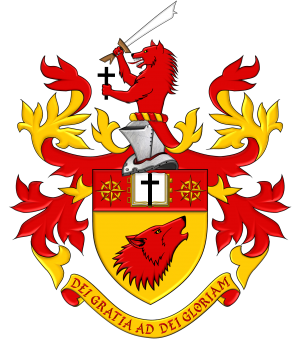 Or, a wolf's head, erased, ululant and sinister facing Gules, on a chief of the last, between two compass roses Or, upon a book open proper, leathered and garnished Or, a Latin cross Sable.

For a crest, a demi-wolf segreant Gules, grasping dexter a kampilan sword Proper and sinister a latin cross Sable.

The wolf in the shield is a definition of the armiger's name: Ran-dal (shield - wolf), either calling a pack to arms or howling at the moon as crying to a higher Power. The Bible and cross represent his faith and vocation. The arms were created with the assistance of the International Society of Commoners Heraldry on Facebook.