From Heraldry of the World
Your site history : Renison University College
Jump to navigation Jump to search 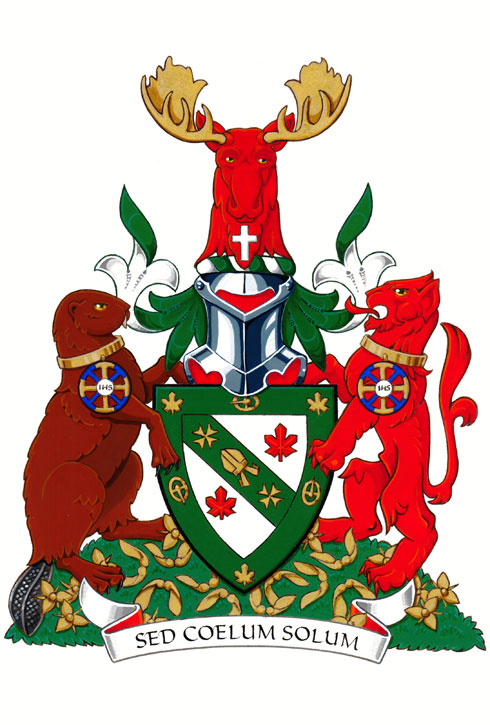 Arms: Argent on a bend Vert between two maple leaves Gules a mitre between two Maltese crosses Or all within a bordure Vert charged with three buckles between three maple leaves Or.
Crest: A moose’s head affronty erased Gules attired Or and charged on the neck with a passion cross Argent
Supporters: Dexter a beaver proper sinister a lion Gules, each collared Or pendent therefrom a wagon wheel composed of a cross potent Or conjoined with a saltire potent Azure surmounted by a plate bearing the letters IHS Sable, standing on a grassy mount Vert strewn with trillium flowers and maple keys Or
Motto: SED COELUM SOLUM

The arms are an augmentation of the older (not officially granted) arms: 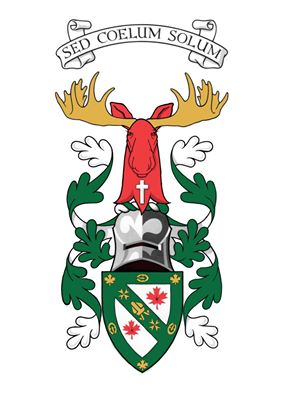 These are the arms of Archbishop Robert John Renison, granted in 1935 by Ulster King of Arms, differenced by the addition of a green border charged with maple leaves and buckles. The buckles are from the arms of Canon Archibald Howard Skirving, the Chairman of the Board of Governors at the time of the grant.

The moose’s head comes from the arms of Archbishop Renison. The cross on the neck is an allusion to the arms of Ian L. Campbell, the Principal at the time of the grant.

The red lion is taken from the arms of the University of Waterloo, and thus symbolizes Renison’s affiliation with the university.
The red lion is also found in the arms of Bishop D. Ralph Spence, Chancellor of the College at the time of the grant. The beaver is taken from the arms of the Anglican Diocese of Huron, the Bishop of which is the Visitor to the College. The wagon wheel is taken from the arms of the Church of the Holy Saviour, Waterloo, the founding parish of the college. The grassy green mount represents Renison’s verdant campus. The trilliums recall the college’s location in Ontario and the Regional Municipality of Waterloo, because they are the provincial flower and are found in the Region’s arms. The maple keys symbolize the founders of the college and their vision that those being educated will grow and develop for the benefit of their communities.

The motto means “But under one sky”; this Latin phrase was the motto of Archbishop Renison, who favoured it in the form “One sky over all”.