From Heraldry of the World
Your site history : Rheinland-Pfalz
Jump to navigation Jump to search 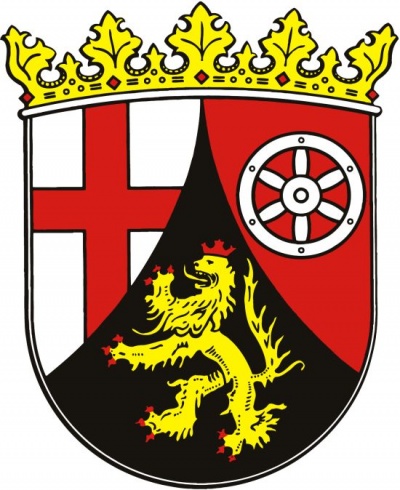 The arms are a combination of the lion of the Pfalz, the wheel of Mainz and the cross of Trier. The major part of the present State belonged to either the Pfalz or the bishops of Trier or Mainz.

Trier was a major city in the area. In the 3rd century a Bishop of Trier was appointed, who in the 8th century became an Archbishop. The diocese had many possessions between the Saar area and the Rhine, mainly along the Mosel river and in the Eifel mountains. The State of Trier existed until 1803 when all wordly possessions of the church were abolished.


The patron saint of Trier is St. Peter (see also the arms ofthe city of Trier), and the old seals of the State show the keys as his symbol. The cross first appears on seals of Archbishop Heinrich von Finstingen in 1273. Later archbishops all used the cross, sometimes combined with the keys. The colours were first mentioned in the Codex Balduini Trevirensis, dating from around 1340.

The history for the wheel of Mainz is similar to the cross of Trier. Mainz became a bishopric in 550 and an archbishopric around 800. The archbishops of Mainz also played a major role in the appointment of the new emperor. The bishops owned large possessions in the present states of Rheinland-Pfalz, Hessen and Bayern. The State of Mainz also existed until 1803.
The arms with the two wheels combined with a cross, appear at the end of the 13th century in the seal of Bishop Sigfried III. The Zürich Roll of Arms from 1335 shows for the bishops of Mainz a banner with a white cross, with in each upper corner a white wheel.

From 1340 onwards the arms show a single wheel on a red shield. In the 13th century a Bishop's hat was added, but it was later removed. The origin of the wheel is not qute known, it has been explained as the wheel of the carriage of God in the prophecy of Ezechiel, or as a Germanic solar wheel.