From Heraldry of the World
Your site history : Richard III Society
Jump to navigation Jump to search 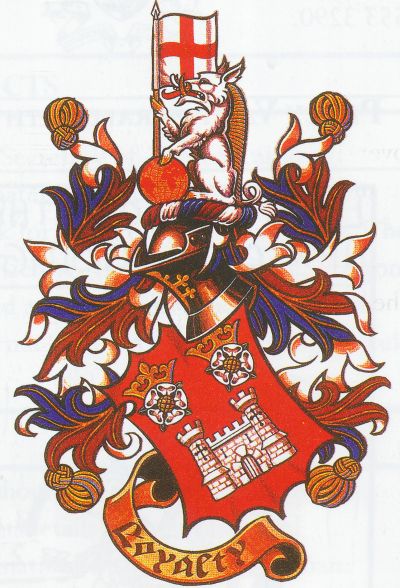 Gules in chief two Roses Argent each ensigned with an Ancient Crown Or in base a Castle Argent and for the Crest a seated Boar Argent hoofed and bristled Or one foot on a Terestrial Globe the other supporting a Banner of St. George. Mantled: Murrey and Azure reversed Argent.

When he was killed at Bosworth on 22 August 1485 Richard III was thirty-three years old. In his brief reign of two years he had been a great benefactor of the Church, a patron of Caxton and of Cambridge University and, very importantly, had founded the College of Arms by letters patent of incorporation dated 2 March 1484. The Society carrying his name was founded in 1924 under the evocative title of The Fellowship of the White Boar, by S. Saxon Barton OBE, a Liverpool surgeon, who became its president. It was reconstituted in 1956 with a wider membership and in 1959 the name was changed to the Richard III Society.

The red field is that of one of the royal house's livery colours and the crowned white roses are for the Yorkist kings. The castle represents Fotheringhay where Richard was born — but it could equally stand for other castles associated with the House of York, such as Middleham or Conisborough.

The boar in the crest is for Richard III himself, the globe shows the world-wide membership of the Society, and the banner of St. George is for Richard's kingdom of England. Murrey and blue were the livery colours of the House of York. The motto 'Loyalty' reflects "Loyaulte me lie", one of the mottoes of Richard of Gloucester, but may be described as a specifically Society version.