From Heraldry of the World
Your site history : Robert Land Academy
Jump to navigation Jump to search 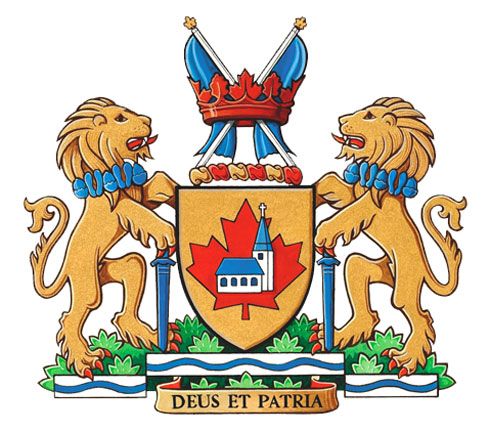 Arms: Or on a maple leaf Gules a church building Argent roof and windows Azure
Crest: Two flags in saltire Azure, the staves Argent, all enfiling a Loyalist civil coronet Gules
Supporters: Two lions Or each gorged of a collar of acorns and maple seeds and resting the anterior paw on a sword Azure, standing on a grassy mound Vert set with a bar rompu Argent charged with a barrulet wavy Azure
Motto: DEUS ET PATRIA

The Academy is named after the United Empire Loyalist Robert Land, and is a boys’ military boarding school. The building with bell tower emphasizes the traditional educational skills for the students. The leaf and building provide the red, white and blue often associated since Loyalist times with affection for the Crown.

The coronet is a Loyalist civil coronet suitable for a corporation. The flag alludes to the flag which is being granted.

The lions allude to the strength of character residing within the foundation values mentioned on the flag. The acorns and maple seeds are the young forms of these plants and are suitable for an institution educating the young. The acorn is the seed of a royal plant badge, the oak. The sword of the military profession shown as sheathed represents the characteristics of gentlemanliness and disciplined readiness, understood as the ability to contain aggression until needed. The compartment represents the Niagara peninsula, the site of the Academy, with the horizontal bar representing the canal. It also portrays the idea of the peninsula supporting the Academy and alludes to the goal of the school, that being to lift up each student by helping him to explore his capabilities and find his niche in society.

The moto means “God and country”.