From Heraldry of the World
Your site history : Rochester
Jump to navigation Jump to search 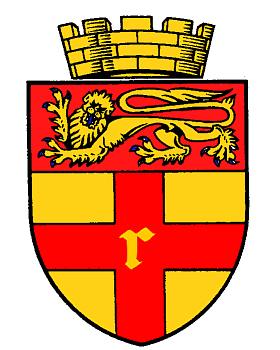 Or on a Cross Gules a Letter R of the field on a Chief of the second a Lion passant guardant Gold.

The arms were officially recorded at the visitation of 1574 as an untinctured seal, and in 1617 as coloured arms.

The arms have the English lion and St George's cross. The design is completed by a letter R for the City's name.

The arms in the town (Images by Derek Howard):