From Heraldry of the World
Your site history : Royal Academy of Dancing
Jump to navigation Jump to search 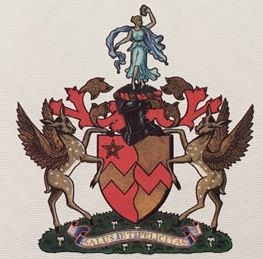 Arms : Per pale wavy gules and Or, a fess dancetty counter­ changed, in the dexter chief a pentacle of the second.
Crest: On a wreath of the colours, A figure representing Terpsichore proper.
Supporters: On either side a doe guardant proper winged Or.
Motto: Salus et felicitas.

If you have any information on these arms Academy of Dancing mail us !