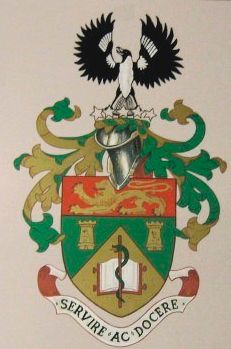 Arms : Per chevron Vert and Or, in chief two Towers Or, in base in front of an open Book Argent, bound and clasped, a Rod of Aescu­lapius Gules, the Serpent Vert, on a Chief Gules a Lion passant Or.
Crest : On a Wreath Or and Vert, a Piping Shrike displayed proper perched upon five Mullets in fess Argent.
Motto: 'Servire ac Docere'

The arms were officially granted on February 3, 1967.

The heraldic lion marks the Hospital's privilege of using the Royal prefix. The two towers com­ memorate the century-old central building recently demolished. In the lower segment of the shield are the emblems of teaching and healing. The book is a replica of the one which appears on the Arms of the University of Adelaide, and marks the association between the University and the Hospital in the Adelaide Medical School.

The Crest showing the piping shrike indicates that the Hospital is a South Australian institution.