From Heraldry of the World
Your site history : Royal Agricultural and Horticultural Society of South Australia
Jump to navigation Jump to search 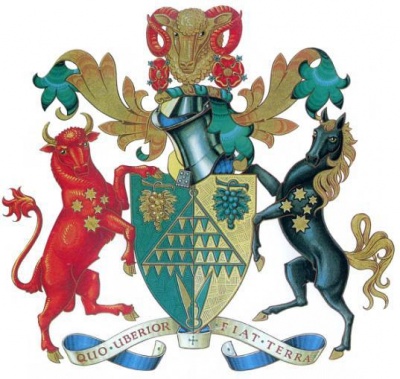 Arms : Per pale Vert and Or, a Triangular Harrow between in chief two bunches of Grapes and in base a pair of Shears all counterchanged.
Crest : On a Wreath of the Colours, between two Roses Gules, barbed and seeded proper, a Merino Ram's head caboshed Or, armed Gules.
Supporters : On the dexter side a Bull guardant Gules, armed and unguled Or, and on the sinister side a Horse guardant Sable, crined, unguled, and each charged on the shoulder with a representation of the Southern Cross composed of five Stars Or.
Motto: 'Quo Uberior Fiat Terra'

The stylized harrow symbolizes cultivation of the soil, and the shears represent the pastoral aspects of primary production, and in particular wool production.