From Heraldry of the World
Your site history : Royal Australasian College of Physicians
Jump to navigation Jump to search 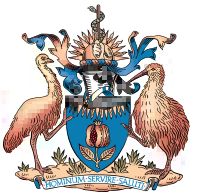 Arms : Azure, a Pomegranate slipped and leaved Or seeded Gules issuant from the chief a Cloud proper irradiated Gold.
Crest : On a Wreath of the Colours in front of a Sun rising Or a Hand grasping a Rod of Aesculapius erect proper.
Supporters : On the dexter side, an Emu, and on the sinister side a Kiwi both proper.
Motto: 'Hominum Servire Saluti'.

The arms were officially granted on September 27, 1938.

The arms are based on those granted in 1546 to the Royal College of Physicians of London.

At the top of the shield the healing rays of the sun are shown issuing from clouds. The pome­granate, which also appears in the Arms of the Royal College of Physicians in London, is thus described by Guillim in his "Display of Heraldry", 1664: "This fruit is holden to be of profitable use in Physick, for the qualifying and allaying of the scorching heat of burning Agues, for which end the juyce thereof is reckoned to have a very soveraigne vertue."

The rising sun in the crest is an allusion to Australia, while the hand holds a rod of Aescu­lapius.

The supporters are on the left an Emu, for Australia, and on the right a Kiwi, for New Zealand.