From Heraldry of the World
Your site history : Royal Australasian College of Surgeons
Jump to navigation Jump to search 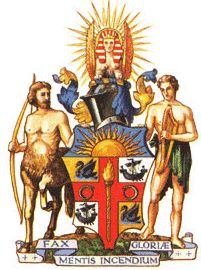 Arms : Quarterly Or and Argent, on a Cross Gules between in the first and fourth quarters a Swan Sable naiant on water proper and in the second and third quarters a Lymphad also Sable, a Torch in pale of the first between two Serpents embowed respectant in fess proper, on a chief Azure, a Sun rising Gold.
Crest : On a Wreath Or and Azure, in front of the Sun's rays Or a Sphinx affrontee proper winged gold.
Supporters : On the dexter side a representation of Chiron, and on the sinister side a repre­sentation of Apollo both proper.
Motto: 'Fax Mentis Incendium Gloriae'.

The Swan is taken from the Australian Coat-of-Arms, and the Lymphad, symbol of discovery by sea, from the New Zealand Coats-of-Arms.

Chiron, as the Mentor of Nestor, may be regarded as the Father of Wisdom. He holds a bow as a symbol that he can protect education by force. Apollo, God of Healing, holds his best-known symbol, the Harp, to show he can instill knowledge by gentle means.

The translation of the motto is: 'The flame of glory is the torch of the mind'.