From Heraldry of the World
Your site history : Royal Children's Hospital
Jump to navigation Jump to search 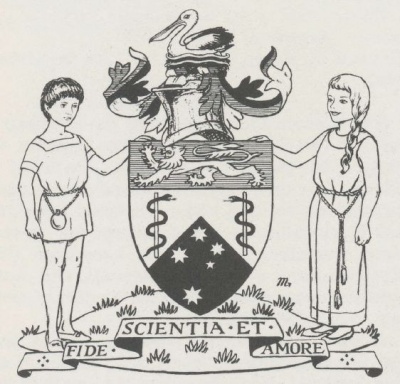 Arms : Per chevron Argent and Azure, in chief two Rods of Aesculapius erect proper, the Serpents respectant Vert, in base a representa­tion of the Constellation of the Southern Cross with five Mullets Argent; on a Chief Gules, a Lion passant Or.
Crest : On a Wreath Argent, Gules, and Azure, on Water Barry wavy Argent and Azure, an Australian Pelican naiant proper.
Supporters : On the dexter side a Boy proper vested in a short Tunic Argent, edged at the neck and sleeves, and pendent from a Cincture a Purse Or, Shoes Vert, and on the sinister side a Girl proper vested in a long sleeveless dress, edged at the neck and hem and Cinctured Or, shoes Vert.
Motto: 'Fide, Scientia, et Amore'.

The Shield contains the symbols of three basic ideas: (a) The lion refers to the Royal prefix granted in 1953, and the patronage of Her Majesty the Queen; (b) The Rods of Aesculapius refer to the art of healing; and (c) the stars refer to thr State of Victoria. The Lion of England is self-explanatory, and

The Crest is the Australian pelican, Pelecanus conspicillatus, found everywhere in Victoria, and, as a pelican is often depicted as 'in its piety', i.e. pecking its breast to feed its young, signifies devotion to the young.

The Supporters, appropri­ately children, are dressed in costumes taken from Greek sculptures of the fourth century B.C. to avoid the dating effect of modern dress.