From Heraldry of the World
Your site history : Royal College of Emergency Medicine
Jump to navigation Jump to search 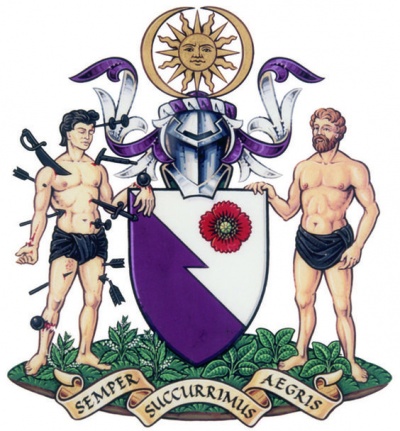 The shield is divided into two by a symbolic lightning strike indicating the use of electricity in accident and emergency, both for instrumentation and defibrillation.

The two halves of the shield are symbolically coloured as night and day (silver). On the sinister half, in the argent part of the shield is a poppy flower, representing the use of opiate analge­sia.

The crest consists of a waxing and waning moon on either side of a symbolic sun. This depicts the fact that accident and emergency work goes on by night and day.

The dexter supporter is a wound man, showing the numerous types of wound to which man may be subjected. A wound man was used from 1491 until the seventeenth century in surgical texts to demonstrate the possible wounds that a physician would be called upon to treat. The supporter on the sinister side represents a healthy man.

The compartment has on the dexter side nettles and on the sinister side dock leaves, indicating harm and the folk­lore cure for the harm caused by nettles.