From Heraldry of the World
Your site history : Royal College of General Practitioners
Jump to navigation Jump to search 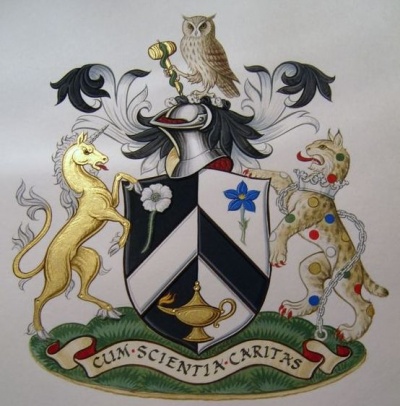 The black and white shield, a mirror image of the arms of St Bartholomew's Hospital, suggests that the family doctor is on duty night and day, and that he shares and is in sympathy with whatever of grief or joy he may find in the home, whose symbol is the chevron, the house-roof.

The opium poppy and gentian flowers are examples of the simple remedies used for centuries, and still used in daily practice. The lighted lamp is taken direct from the crest of the Royal College of Nursing, and will serve as a perpetual reminder of how much is owed to the sister profession.

The supporters are a unicorn and a lynx. The unicorn comes from the Arms of The Worshipful Society of Apothecaries granted to the apothecaries in 1671. The horn of the unicorn had been always credited with miraculous powers. When used as a drinking cup it protects against 'poison, convulsions and epilepsy'".

The lynx first appears as an augmentation granted in 1569 to the Worshipful Company of Barbers, his coloured spots being the eyes all over him, which give him his all-seeing character - appropriate for a general practitioner.

The crest is the owl, for wisdom, holding the chairman's gavel which was presented to the College by the Greek Ambassador at the first Annual General Meeting in November 1953.

Literature : Journal of the College of General Practitioners 5(1962)1–2.