From Heraldry of the World
Your site history : Royal College of Midwives
Jump to navigation Jump to search 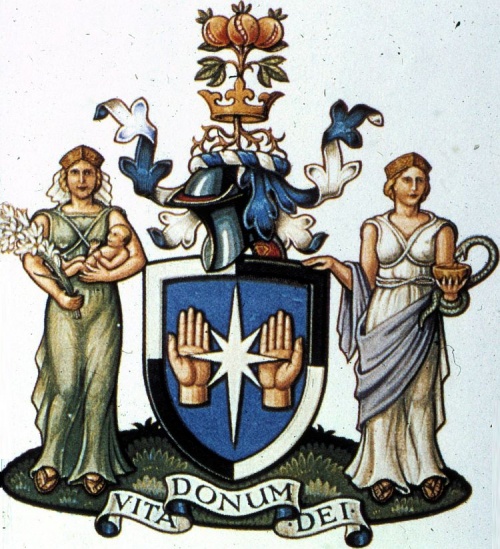 Arms : Azure, a sinister and dexter hand erect couped in fesse proper surmounted of a mullet of eight points the uppermost and lowest points extended palewise argent; a bordure quarterly of the last and sable.
Crest: On a wreath of the colours, A pomegranate tree eradicated and fructed proper, the stem enfiled by an ancient crown Or.
Supporters: On the dexter side a representation of Juno Lucina proper, vested : vert, with veil argent, and dia­dem and sandals Or, holding on the interior arm a naked child and in the exterior hand a sheaf of white lilies, all also proper;.and on the sinister side a representation of Hygeia likewise proper, vested also argent, with mantle purpure, and diadem and sandals gold, holding in the exterior hand a bowl of the last, the arm entwined by a serpent also vert.
Motto: Vita donum Dei

Blue is traditionally the colour for the midwife; this colour signifies chastity, loyalty and fidelity. The black and white border represents night and day, as the midwife’s work is never done. The star is the Morning Star or Star of Bethlehem, the sign of birth, surrounded and supported by the hands of the midwife.

The pomegranate tree in the crest is an ancient symbol of fertility, and the crown encircling signifies a Royal College.

Juno Lucina was the Roman goddess of Light, and the protectress of womanhood, marriage and childbirth. She is often depicted (as here) holding a sheaf of white lilies in one hand and a young child in the other. Hygeia was the goddess of physical and mental health, and was one of the six daughters of Aesculapius, the god of Medicine. She is depicted with a serpent entwining her left arm. Not only was the serpent the sign of wisdom and knowledge, but it was the sign of eternal life, as it appears reborn when it cats its old skin.

The motto of the Royal College of Midwives is “Vita Donum Dei” – “Life is the Gift of God”.