From Heraldry of the World
Your site history : Royal College of Paediatrics and Childs Health
Jump to navigation Jump to search 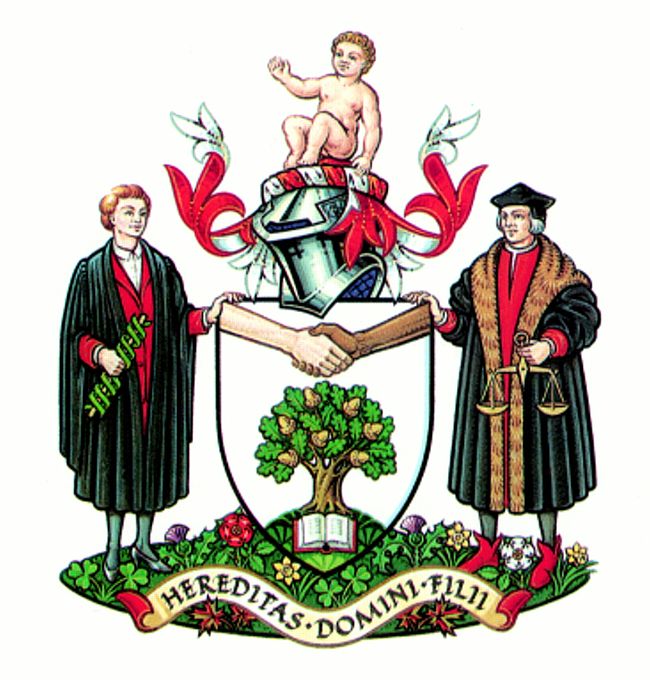 The arms were officially granted in 1996.

The oak tree on a green meadow represents child development and health. The book indicates education and scholarship. The two hands represent friendship, which was one of the first rules of the British Paediatric Association.

The supporters are a Mother figure with red hair in modern academic dress resembling Baroness Lloyd of Highbury who was the first woman President of the British Paediatric Association. She is holding a rod with a double stranded helix indicating the importance of science and, in particular, genetics, to advances in child health. The device also refers back to the serpent-entwined staff of Aesculapius.

The other supporter is a Father figure of Thomas Phaire who was the author of the first book on paediatrics in English (1545) in contemporary, academic dress. He is holding scales which signify the role of the College in setting standards and professional examinations.

The crest shows a child to represent the concept that the aspiration of parents and paediatricians is that the child should reach a level of attainment which is higher than their own. The child has been redrawn from the Arms of the Foundling Hospital in Coram Fields to show an association with children’s hospitals.

The compartment signifies the responsibility of the College towards children throughout the world. At the inaugural meeting of the British Paediatric Association, representatives of different regions of the British Isles were appointed and the College is still constituted in this democratic way, as shown emblematically by the rose, the thistle, the shamrock and the daffodil. Maple leaves commemorate Donald Patterson who was the driving force for the inauguration of the British Paediatric Association and served as a leader for the first 20 years.

The motto is from Psalm 127, Hereditas Domini filii. Children are a heritage from the Lord.