Royal College of Surgeons of England

From Heraldry of the World
Your site history : Royal College of Surgeons of England
Jump to navigation Jump to search

ROYAL COLLEGE OF SURGEONS OF ENGLAND 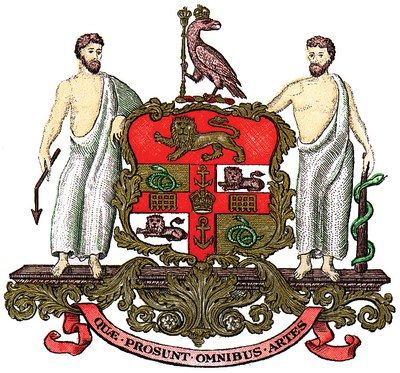 Arms : Quarterly Or and argent, a cross gules (being that of St. George) thereon the Imperial Crown proper between two anchors erect in pale and two portcullises in fess of the first, in the first and fourth quarters a serpent nowed and in the second and third a lion couchant guardant proper; on a chief of the third a lion passant guardant of the first being part of the Royal Arms of England.
Crest: On a wreath of the colours, An eagle reguardant imperially crowned proper, the dexter claw supporting a mace erect gold.
Supporters: On the dexter side a figure representing Machaon habited in a robe, holding in the exterior hand a dart broken, the point downwards, and on the sinister a figure representing Podalirius, habited as the dexter, holding in his exterior hand a staff entwined by a serpent, all proper.
Motto: Quae prosunt omnibus artes.

The arms were officially granted on October 7, 1822.

The Royal College of Surgeons was incorporated by Royal Charter in 1800. In the middle ages, the surgeon's craft was controlled by the Fellowship of Surgeons of London, an unincorporated body to which the College today can trace unbroken succession. An ordinance book of the Fellowship of Surgeons of 1492-7 in the Guildhall Library shows a badge of a spatula bearing a red rose surmounted by a gold crown. This badge is supported by the patron saints of the surgeons SS. Cosmo and Damian and beneath is the inscription "The Year of Our Lord MCCCCLXXXXII at the going over the sea of our Sovereign Lord King Harry the VIIth in to France, these arms were given on to the Craft of Surgeons of London the VIIth year of his reign in the time of Hugh Clopton, Mayor."

The new Company of Surgeons did not seek a patent from the Kings of Arms but, within a few weeks of its incorporation, paid one Mr Brookshead three guineas "for painting the Company's Arms". This handsome "achievement" can be emblazoned thus:
Quarterly or and argent, on a cross engrailed azure an Imperial crown proper between two anchors erect in pale and two portcullises in fess of the first, in the first and fourth quarters a serpent nowed and in the second and third quarters a lion couchant guardant all proper.
Crest: on a wreath or an gules an eagle reguardant proper.
Supporters: on the dexter side a figure representing MACHAON habited in a robe holding in his exterior hand an arrow broken, the point downwards all proper and on the sinister side a figure representing PODALIRIUS habited as the dexter holding in his exterior hand a surgeon's knife all proper.
Motto: Quae prosunt omnibus artes. (The arts that are of service to all)

The anchors probably relate to the function of the Company examining surgeons for the Royal Navy. The reason for the portcullises is not clear. The anchor is the badge of the parish of St. Clement Danes and the portcullis is a charge in the arms of the City of Westminster.

The supporters Machaon and Podalirius were two brothers who served as surgeons to the Greek forces at the siege of Troy. Machaon extracted a broken arrow from the side of King Menelaus.

The Company of Surgeons was dissolved in 1798, and in 1800 the Royal College of Surgeons of London was granted its charter. The new College at first used the 1745 arms but the Bedell's staff, hall-marked 1803-4, shows only Podalirius holding the staff of his father Æsculapius.

It is noteworthy that the issue of am additional Royal Warrant for granting arms is usually confined to members of the Royal Family, Overseas Dominions and persons on whom the Sovereign wishes to confer an Augmentation of Honour. The chief bearing a Royal lion passant guardant and the crest with the College's eagle reguardant imperially crowned holding the mace are such augmentations, as indeed is the cross of St. George bearing the Imperial Crown.

The new arms thus are basically identical to the 1745 arms, with the augmentation of the chief and crest.