From Heraldry of the World
Your site history : Royal London Mutual Insurance Society
Jump to navigation Jump to search 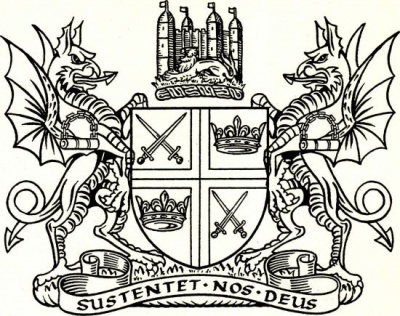 Arms: Argent, a cross quarterly gules and vert between in the first and fourth quarters two swords in saltire of the second and in the second and third quarters an ancient crown of four fleurs-de-lys of the third.
Crest: On a wreath of the colours, Upon a mount vert, in front of a representation of the White Tower of the Tower of London proper a lion couchant gules.
Supporters: On either side a dragon argent charged on the shoulder with a fetterlock gules.
Motto: Sustentet nos Deus

The arms were officially granted on January 12, 1934. We have no information on the meaning or origin of these arms.

If you have any information on these arms London Mutual Insurance Society mail us !