From Heraldry of the World
Your site history : Royal Photographic Society
Jump to navigation Jump to search 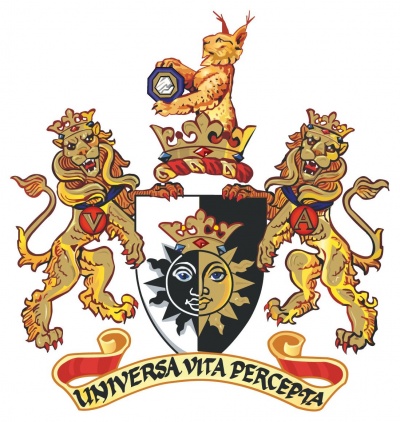 Arms: Per Pale Argent and Sable a Sun in splendour per pale Sable and Or visaged on the dexter side Argent and on the sinister side sable with Blue Eyes proper and ensigned by an Ancient Crown Or Rim jewelled with Sapphires and Rubies proper.
Mantling : Parted Gules and Azure doubled Parted Or and Argent.
Crest : Upon a Helm with a Wreath Or and Gules Issuant from an Ancient Crown Or the Rim jewelled with Sapphires and Rubies proper a demi-Lynx also proper holding between the forelegs an Octagon Azure voided Or thereon an Equilateral Triangle the points couped silver proper.
Supporters : On either side a Lion rampant guardant Or crowned with an Ancient Crown of the last, the Rim jewelled with Sapphires and Rubies proper around the neck of each a Riband Azure pendant there from a Torteau that to the dexter charged with the Capital Letter V Or and that to the sinister with the Capital Letter A Or.
Motto: "Universae Vitae Percepta"

The elements in the shield represent the basis of black and white photography, and that photographic images are perceived through the eyes with all light and energy ultimately deriving from the sun.

The mantling incorporates the Royal livery colours (red and gold) and the Society's colours (blue and white). The colours gold, red, blue and white symbolise the practice of colour photography.

The concept of the lynx on the crest derives from the fact that the lynx, in mythological terms, is said to have the power of being "all seeing" - into and through substances - and therefore is appropriate to photography and imaging. The device held by the lynx represents both the basis of photography - the rare and normal crystalline habits of silver halides - and the historic move of the Society's House to the Octagon in Bath.

The lions on either side of the shield with their ciphers (V and A) pay tribute to our historical connections and Royal Patronage dating back to Queen Victoria and Prince Albert. The lions are based on those on Prince Albert's garter stallplate at St. George's, Windsor.

The motto translated is ALL LIFE PERCEIVED to indicate that the ability and potential for photography to observe and record (and thereby to understand) so much of that which constitutes our life.