From Heraldry of the World
Your site history : Royal Saint George's College
Jump to navigation Jump to search 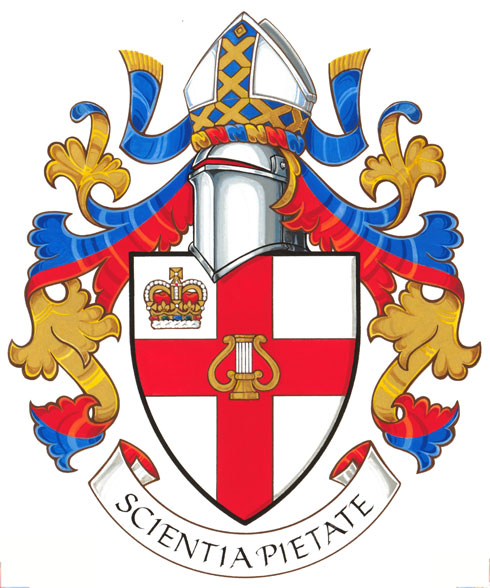 Arms: Argent on a cross Gules a lyre Or, in the canton the Royal Crown proper.
Crest: A mitre Argent its orphreys Azure charged with saltires Or its infulae Azure fringed Or.
Motto: SCIENTIA PIETATE

The arms were officially granted on September 15, 2014.

The red cross on white has been associated with St. George since the 15th century. The lyre refers to the fact that Royal St. George’s College is a choir school. The Royal Crown indicates that the school was given royal designation by H.M. The Queen in 1989. Crest

The mitre was used with the original coat of arms of the school as a reference to its association with the Anglican Church of Canada, as well as the former status of St. Alban’s chapel as the cathedral of the Diocese of Toronto. The yellow saltire crosses on blue refer to St. Alban, a design originally used by St. Alban’s Abbey and the town of St. Albans in England, and subsequently by St. Alban’s Cathedral, Toronto, and its school, which operated from 1898 to 1910 in several of the current school’s buildings.

The motto means “By knowledge, by dutifulness” and was suggested by one of the school’s founders, Professor J.B.E. Garstang, and has been in use since the founding of the school.