From Heraldry of the World
Your site history : Royal School of Church Music
Jump to navigation Jump to search 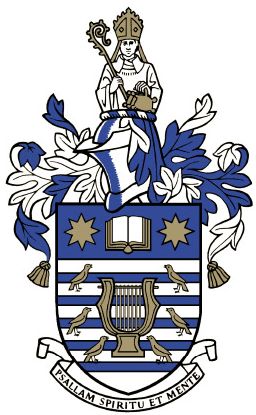 Arms : Argent, five barrulets azure, over all a lyre between six nightingales, three and three, respectant in pale Or; on a chief of the second an open book proper between two stars of eight points of the third.
Crest: On a wreath of the colours, A demi figure of St. Nicholas vested in pontificals proper; mitred, and holding in his dexter hand a pastoral staff and in his sinister hand three purses Or.
Motto: Psallam spiritu et mente

If you have any information on these arms School of Church Music mail us !