Royal Society for the Prevention of Cruelty to Animals

From Heraldry of the World
Your site history : Royal Society for the Prevention of Cruelty to Animals
Jump to navigation Jump to search

ROYAL SOCIETY FOR THE PREVENTION OF CRUELTY TO ANIMALS 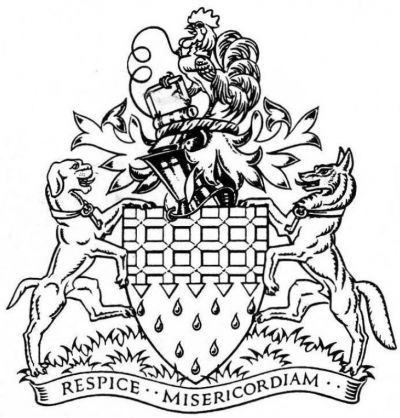 The arms were officially granted in 1990.

The half raised portcullis suggests the release of animals from traps and cages. As a barrier it stands for the prevention of cruelty and enforcement of the law and as the emblem of the Palace of Westminster it represents legislation in favour of animals, and Parliamentary lobbying.

The droplets represent mercy or kindness. They can also be seen as drops of gold as a reference to the Society's income from bequests, and as drops of blood symbolizing the suffering of animals.

The crest is a cockerel representing birds in general and farm animals in particular, around its neck is a broken collar attached to an open fetterlock, again suggesting release from unwelcome captivity and from cruelty in all its forms.

The supporters are a talbot to represent domestic or companion animals and a fox to represent wild animals. Round the neck of each hangs a golden key as a further reference to the release of captive animals and to education as the key to knowledge and understanding. The alert demeanour of the cockerel and the supporters demonstrates the vigorous and fearless nature of the policies and activities of the Society.