Royal Society for the encouragement of Arts, Manufactures and Commerce

From Heraldry of the World
Your site history : Royal Society for the encouragement of Arts, Manufactures and Commerce
Jump to navigation Jump to search

ROYAL SOCIETY FOR THE ENCOURAGEMENT OF ARTS, MANUFACTURES AND COMMERCE 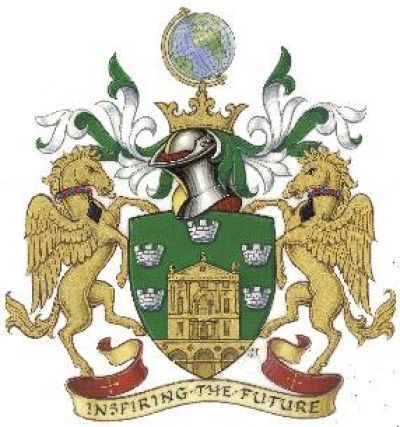 Vert issuing from the base an Arcade thereon the Façade of the House of the Royal Society of Arts Or encircled by five Mural Crowns Argent. The Crest is Upon a Helm Within an Ancient Crown Or a Terrestrial Globe proper on its stand Or, Mantled Vert doubled Argent. The Supporters are On either side A Pegasus wings inverted Or about the neck a Torse Azure and Gules pendant therefrom by a Chain a Lozenge Sable.

If you have any information on these arms Society for the encouragement of Arts, Manufactures and Commerce mail us !