From Heraldry of the World
Your site history : Royal Society of Medicine
Jump to navigation Jump to search 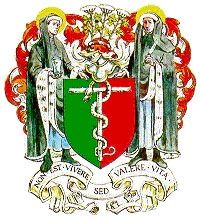 The arms were officially granted on October 7, 1927.

The shield is divided vertically into green and red to indicate physicians and surgeons respectively.

The arms are based on a rod of Aesculapius, the typical symbol for medicine, but described as a Tau cross (for St. Anthony) and a Serpent of Moses. There are two references to Moses and serpents in the Bible - Exodus iv, 1-5 and Numbers xxi, 5-9; the latter mentions a serpent of brass and tells of its protective powers against snake-bite.

The crest consists of three sprigs of the 'all-heal' plant arising from the crest wreath. With each tie, the Society issues a description of the plant taken from the famous Herbal of Nicholas Culpeper (1616-54) who listed its therapeutic virtues. In the original painting on the Grant of Arms the herb is depicted with offwhite flowers, but the common variety, Prunella vulgaris, has purplish-blue flowers. In the Society's arms it seems to be Prunella laciniata, a rare species found only in certain areas of chalky Southem England which did not find its way into the British Flora until 1906.

The supporters are the well known martyrs St Cosmos and St Damian, often considered patron saints of physicians. They feature as supporters very early in medical heraldry and are depicted in the arms used by the Fellowship of Surgeons of London in 1492. St Cosmos bears a drug jar and St Damian holds a surgeon's knife.

The motto can be translated as 'It is not sufficient in life merely to exist, but rather to flourish'.