From Heraldry of the World
Your site history : Royal Society of St George
Jump to navigation Jump to search 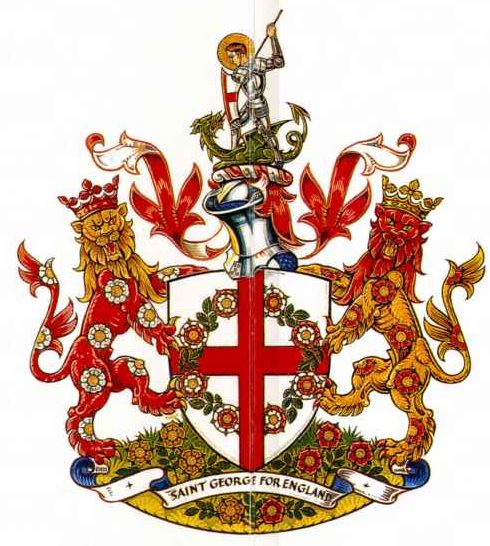 Arms : Argent a Cross Gules interlaced with a Chaplet of eight Tudor Roses alternately Gules upon Argent and Argent upon Gules barbed and seeded proper.
Crest : upon a Helm on a Wreath Argent and Gules a figure of St George in plate armour Argent nimbed Or on his arm his shield standing astride and with his spear slaying a Dragon couchant reguardant Vert.
Supporters: On the dexter side a Lion guardant the body Gules armed Or semy of roses Argent barbed and seeded proper the head and mane Or ducally crowned Gules on the sinister side a similar Lion the body or armed and semy of Roses Gules barbed and seeded proper the head and mane Gules ducally crowned Gold the Compartment comprising a grassy mount growing therefrom Roses barbed seeded and leaved proper those to the dexter or and those to the sinister Gules.
Motto: "Saint George For England"

The Royal Society of St George is an English patriotic society established in 1894 to encourage interest in the English way of life, and English customs and traditions. The arms thus refer to St. George (cross, crest) and England (roses, supporters).