From Heraldry of the World
Your site history : Rutgers University
Jump to navigation Jump to search 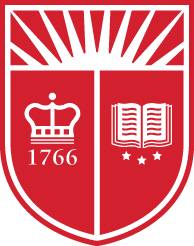 This heraldic logo was officially adopted in 2016.

The sunburst conveys illumination—light as metaphor for knowledge—and it is the motif of our seal and the heart of our motto, “Sun of righteousness, shine upon the West also.” The seal and motto are both variants on those of University of Utrecht, the Netherlands.

The crown represents our founding in 1766 as Queen’s College, named in honor of Queen Charlotte, wife of Great Britain’s King George III who reigned over the American colonies when our charter was signed.

The book is an obvious symbol for learning. The three stars represent the State of New Jersey, the third state to ratify the U.S. Constitution.

The logo replaced arms adopted in 1966: 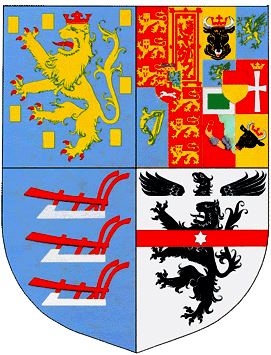 Thefirst quarter bears the arms of Nassau, and recognizes the Dutch settlers, who founded the college under the aegis of the Dutch Reformed Church.

The second quarter includes the armorial devices of King George III combined with Queen Charlotte's. George III granted the Charter of 1766 to Queen's College, named in honor of Charlotte of Mecklenburg, his consort. George III's arms represent his dominions of England, Scotland, and Ireland; the two small escutcheons, centered, his ancestral right to bear the arms of Brunswick and Saxony. The crest, on the dexter small escutcheon, is the Crown of Charlemagne,which George III, as Treasurer of the Holy Roman Empire, was entitled to show. The arms shown on the sinister half of this quarter are Queen Charlotte's and represent the German states ruled by the House of Mecklenburg.

The third quarter is the emblem from the Great Seal of the State of New Jersey, which Rutgers as the state university is entitled to show. Fittingly, the ploughs depicted also symbolize Rutgers' designation as one of the original land-grant colleges.

The fourth quarter, sinister, is the Coat of Arms of Colonel Henry Rutgers, an early benefactor of Queen's College, and descendant of Rutger Van Schoenderwoerdt, who settled in New York in the 17th century. The family name was changed to Rutgers in 1636, and the college was renamed in 1825 to honor Colonel Rutgers, as trustee and benefactor.

Literature : Image and information from https://www.rutgers.edu/about/rutgers-shield and