From Heraldry of the World
Your site history : Saarland
Jump to navigation Jump to search 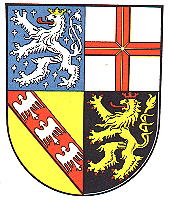 A large part of the State, especially in the Southern and Western parts, the Counts of Lorraine (Lothringen) owned large areas and had much influence from the 11th century until the 16th century. The arms of Lorraine are known since the 12th century. See also the part on Lorraine in the French section of the site (when available).

The area around Zweibrücken was part of the Principality of Pfalz-Zweibrücken . The area was inherited in 1381 by the Wittelsbach family (see Bayern, who also ruled the Pfalz. Besides Zweibrücken they also aquired Homburg and Nohfelden. The history of the lion of Pfalz is described under Rheinland-Pfalz.

The Bishops of Trier, finally, owned Sankt Wendel and some smaller areas. The cross is the arms of the state, not the city of Trier.

Saarland has not been a historical state. It was first created in 1919 by the League of Nations. In 1920 the first arms were created (see below). The new arms showed elements from the major towns in the new state. The first quarter showed the wheel of Sankt Ingbert, the rose was taken from the arms of Sankt Johann, which at the time already was a part of Saarbrücken. The sun and cloud were taken from the arms of Saarlouis and the lion is again the lion of Saarbrücken. The arms were in use until 1935.

After the second World War the area was ruled by France. It was not returned to Germany until 1957. In the meantime sme completely different arms were used. The arms showed a simple cross and were based on the French colours. The strange bridge-like crown symbolised the place of Saarland between France and Germany (a bridge function). The arms were used until 1957.

The bridge-like crown is actually a symbolic image of the "Alte Brücke" (Old Bridge) in Saarbrücken, the oldest (remaining) stone crossing of River Saar. This coat of arms is still used by regionalists along with the word "Sarre" ("Saar" in French) on car stickers etc... to show their affection to "Saarland Independence".

Already in 1951 the Saarland Historical Association designed new arms based on the historical areas. The arms showed the same figures as the present arms, but the sequence was different. In 1952 in a new design the arms of the Counts von der Leyen (who had several possessions in the area) were added and the Saarbrücken lion was transferred to an escutcheon. On these designs the present arms were based.