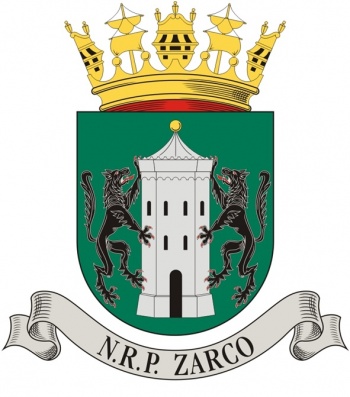 The arms are based on the house of CÂMARA family arms.

"Zarco" is from "João Gonçalves Zarco" who received from the king of Portugal the title of nobility for his service as crusader knight fighting against Islamic invasion in North Africa and sea explorer under Henry the Navigator, Grand Master of the Catholic Crusader Order of Christ.

The location that Zarco discovered and became responsible was named Câmara de Lobos and the new name of the noble family became "of CÂMARA", or fully "Johannes Gonçalves Zarco de Câmara". The Zarco name vanished and all the sons carried only "de Câmara", meaning "of Câmara de Lobos", the location.

The family arms show a black field, with to golden lions holding a silver tower.