From Heraldry of the World
Your site history : Saint Felix School
Jump to navigation Jump to search 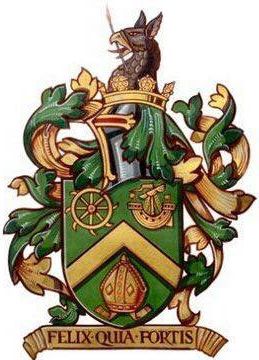 Arms: Vert, a chevron between in chief to the dexter a Catherine wheel and to the sinister a lymphad, and in base a mitre, all Or.
Crest: Issuant out of a coronet composed of six roses set upon a rim Or, a griffin's head holding in the beak a taper inflamed proper.
Motto: Felix quia fortis

If you have any information on these arms Felix School mail us !